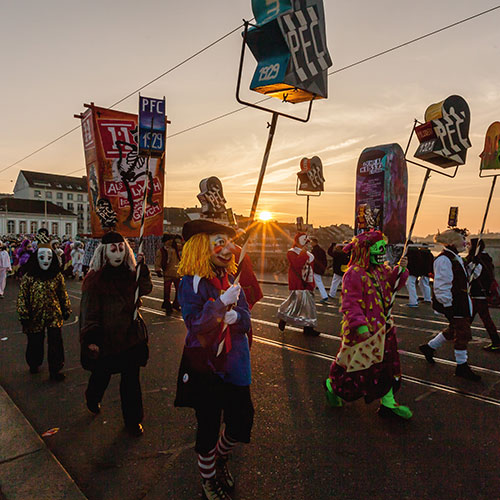 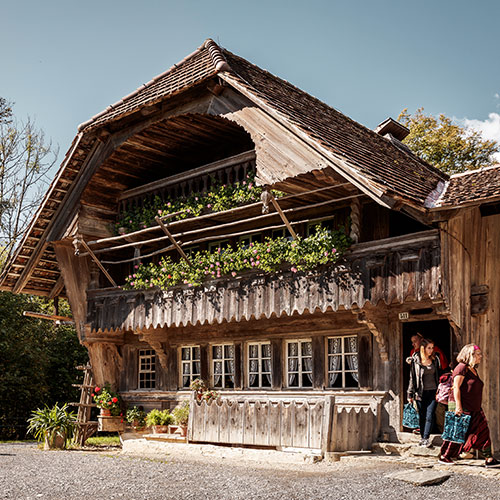 Culture, events and tourism in Switzerland

To assist you in preparing your travel to Switzerland, this page lists the most popular cultural and leisure venues. Send us an E-mail if you would like us to add a venue to this list or include another event in the cultural calendar. Here is the section for museums.
‹ Photo: © swiss-image.ch/Jan Geerk / › © Ballenberg, Freilichtmuseum der Schweiz

Calendar of Cultural 2022 for the City of Switzerland 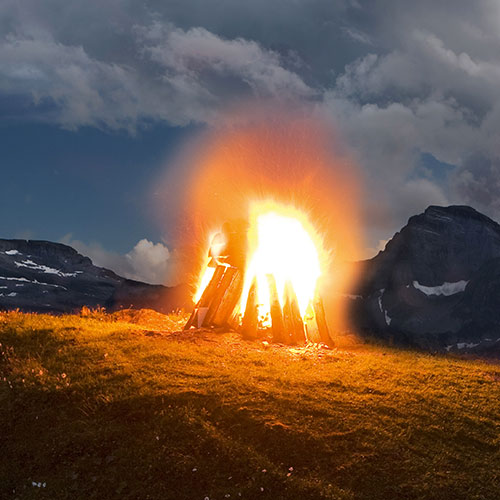 The Swiss National Day was first celebrated in 1891 on the occasion of the 600th anniversary of the Federal Pact of 1291 by the original cantons of Uri, Schwitz and Unterwalden. Following an initiative launched on the 700th anniversary, since 1994 it has been a public holiday.

On 1 August or sometimes on 31 July, the Swiss communes organize a magnificent popular festival at nightfall with a large bonfire (evoking the signals used in the past as a means of communication), a procession with lanterns and speeches, followed by fireworks, more or less important depending on the town. Of course, there is plenty to eat with the traditional pea soup and good regional wines. Since 1993, farm brunches have been organized by farmers, it is worthwhile to register early enough. In short, if you are in Switzerland on this date, don't stay at your hotel and experience the Swiss conviviality. - Photo: © swiss-image.ch / Marcus Gyger

• Brunch at the farm - www.brunch.ch
• Your hotel or the tourist office will be happy to provide you with information on the August 1st program of the city where you are staying.

The best orchestras in Switzerland

In order to make your stay in Switzerland more enjoyable, we have listed the best orchestras and concert halls in French and German-speaking Switzerland. For the graphic arts, you will find on our museums page, international references for all enthusiasts. 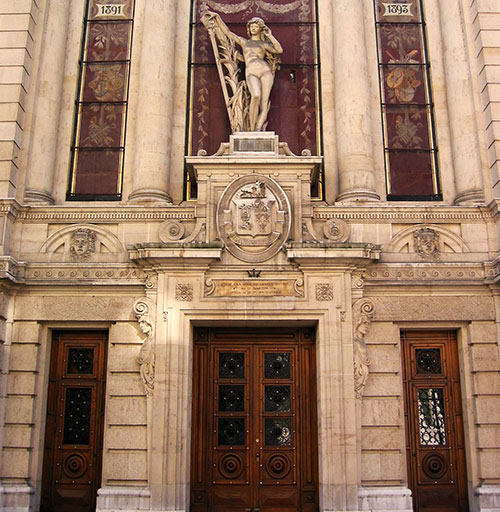 The Victoria Hall is known worldwide for its excellent acoustics and its monumental organ, one of the most famous in Europe. High place of classical music, superb Neo-Rococo Hall inaugurated in 1894, erected by Sir Barton, consul in Geneva, dedicated to her Majesty Queen Victoria or... to his wife - also named Victoria... Today it is above all the Orchestre de la Suisse Romande (OSR) conducted since 2017 by Jonathan Nott which plays there. Photo: © Genève Tourisme 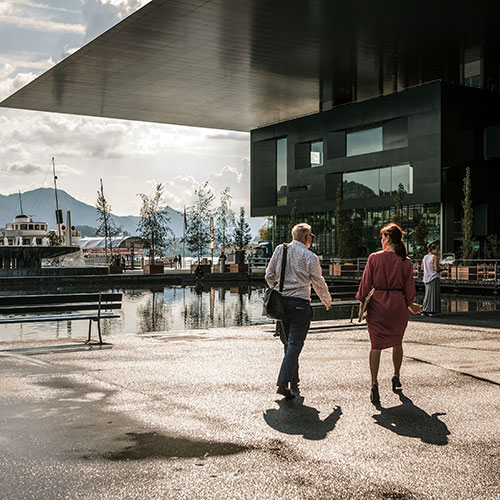 Since 1998, the KKL, the Lucerne Culture and Convention Center, has had one of the world's most acoustically pleasing concert halls. Multifunctional, the KKL was built according to the plans of Jean Nouvel and is also used as a congress center and for the Lucerne Museum of Art. Concerts under the auspices of the Lucerne Symphony Orchestra are exceptional. In addition, every year the KKL is the center of the best classical music festival in Switzerland. Photo: © swiss-image.ch/Andre Meier

Tourist sites - Activities for everybody in Switzerland

Below, we present some of the tourist sites that we recommend for your vacations in Switzerland. We would also like to remind you that LatLon-Europe presents other tourist destinations. Writes to us if you have other ideas to complete our pages. 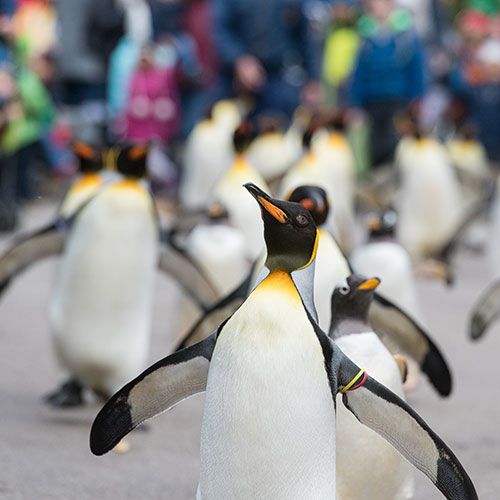 All the children of Switzerland have visited it. Basel Zoo, nicknamed Zolli by the locals, is the largest, most beautiful and oldest zoo in Switzerland and has been since 1874. Located in the district of Bachletten you can get there on foot from the train station in 10 minutes or with streetcar lines 1 and 8. Regularly modernized, Basel Zoo tries to offer as much space as possible to its animal guests, which contributes to the success of international breeding programs for rare species. As the park is heavily wooded, many free-roaming animals frequent it: in particular, the many storks that breed here have become an attraction in their own right. The other large zoo in Switzerland is the Zurich Zoo. Photo: © Zoo Basel 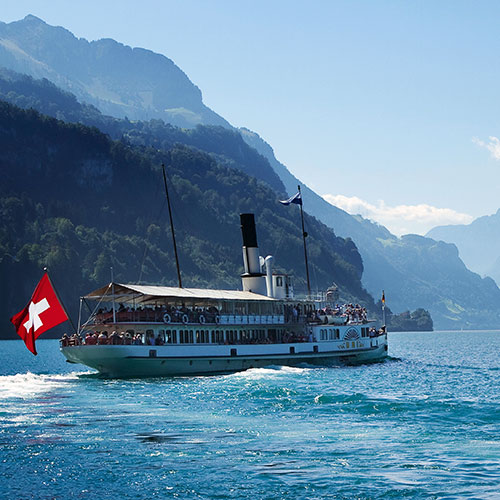 Switzerland is a country of lakes and mountains with splendid landscapes. Before we introduce you to the large lakes and its shipping companies, we present three small lakes located in unspoiled wilderness; The Lake (Etang) of Gruère located in the canton of Jura near Saignelégier - The Blauersee (Blue Lake) with its crystal-clear waters surrounded by an alpine forest, it is in the Bernese Oberland in the valley of Kandersteg - And in the mountains, the Lake of Bachalp near Grindelwald. For a romantic or family cruise, of course, the must-see is Lake Lucerne from Lucerne, but don't forget to take a lake excursion on Lake Geneva from Lausanne or Geneva. Tours are offered on the Three Lakes of Neuchâtel, Murten and Biel/Bienne to spend a few hours on St. Peter's Island or visit the medieval city of Murten. Photo: © swiss-image.ch/Beat Mueller

Rail travel in the Swiss Alps 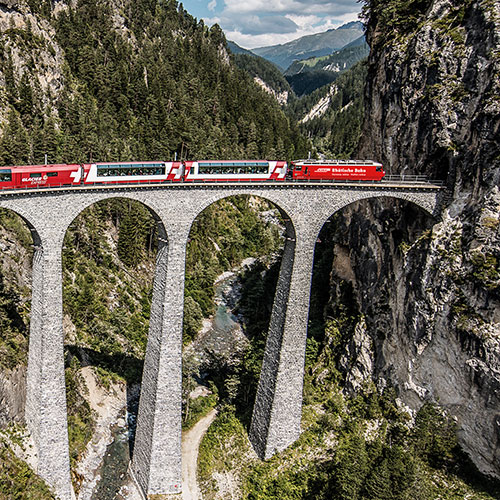 Switzerland is known for the quality and originality of its trains. Make the most of it with special offers over several days. The highest railway station in Europe is located at 3'454 m above sea level at the top of the Jungfraujoch Mountain with an impressive view of Switzerland and the Aletsch Glacier. The Glacier Express is one of the most beautiful railways in the world and crosses the Swiss Alps. To be done in stages. Illico Travel will be able to inform you if you want an organized trip. Photo: © swiss-image.ch/Andrea Badrutt 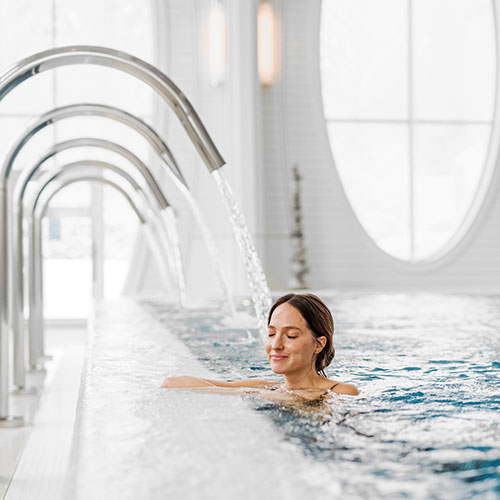 What could be more pleasant after a few beautiful hikes than to enjoy a relaxing day in one of the many thermal baths in Switzerland. Here the most beautiful and well-known: In the French speaking part of Switzerland we recommend you the thermal baths of Yverdon-les-Bains - At the foot of the Alps in the canton of Valais the thermal baths of Lavey and Leukerbad in the upper Valais. In German-speaking Switzerland especially in the Grisons with the Bains de Samedan and "7132" in the valley of Vals. And in Bad Ragaz the Tamina Therme. Photo: © swiss-image.ch/Andre Meier

The Swiss Open-Air Museum Ballenberg is located in the Bernese Oberland and aims to highlight traditional Swiss rural living. When the "Swiss Museum of Rural Living" was founded in 1978, there were 16 buildings and by 1985 there were 61. In 1982, a typical Geneva farmhouse was threatened with demolition and moved to Ballenberg. Over time all the cantons are represented in Ballenberg with their traditional houses. Today, it is 109 buildings on 66 hectares that you can visit. Photo: © Ballenberg, Freilichtmuseum der Schweiz

The Swiss Museum of Transport is by far the most visited museum in Switzerland and particularly interesting if you are with your family. It presents a collection of vehicles (locomotives, railcars, automobiles, boats, airplanes, satellites, space vehicles), more than 3,000 objects on 22,500 m² of exhibition space. But you will also find a Planetarium, a 3D cinema or the Swiss Chocolate Adventure. Thus the prices are variable. You should count on one day, especially with the children and the attractions on offer. Photo: © Verkehrshaus

The Castle of Chillon

The Riviera region bears his name because of the excellent climate reminiscent of southern Europe. Between the beautiful cities of Montreux and Vevey, two tourist destinations await you; Le Lavaux, a wine region in the canton of Vaud known for its terraced vineyards on the shores of Lake Geneva, is a UNESCO World Heritage Site. On the Riviera you also have the most visited tourist site in Switzerland; The Castle of Chillon in Veytaux was successively occupied by the House of Savoy and then by the Bernese and was built on an island on the shores of Lake Geneva. Photo: © swiss-image.ch/Ivo Scholz

The village and the region of Gruyère 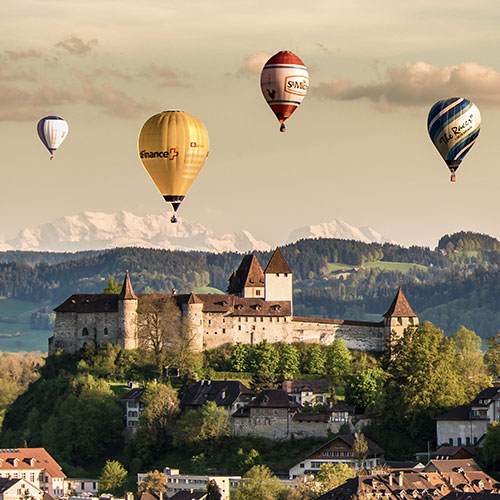 You know its cheese, but Gruyères is also one of the most beautiful villages in Switzerland. It occupies a remarkable position on a rocky spur overlooking the Sarine valley. Its castle, its walls, churches and houses testify to the importance of this region in the Middle Ages. Visit the castle-museum but also the very surprising and contrasting HR Giger museum of the creator of the monsters from the movie Alien. We also recommend you to go up the Moléson mountain (funicular and cable car) or the "Maison du Gruyère" and taste the double cream or a fondue. Photo: View on the Castle of Gruyère © swiss-image.ch/Ernst Christen 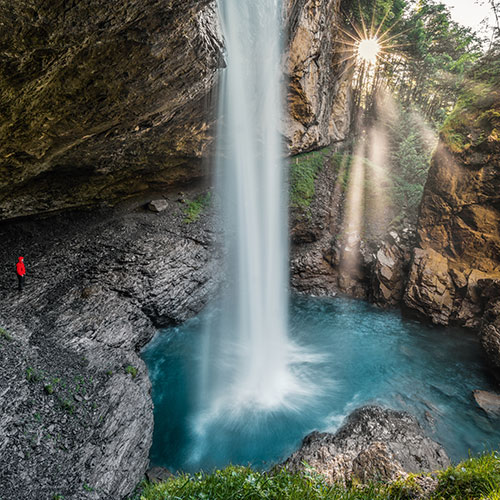 Switzerland has beautiful public caves. We recommend : The caves of Vallorbecaves of Vallorbe (jura vaudois) - The caves of Réclère in the Jura west of Porrentruy - In the Valais, the fairy cavefairy cave at the entrance to Saint-Maurice and the underground lake of Saint-Léonard. In the canton of Neuchâtel two surprising places are waiting for you: The underground mills of the Col des Roches and the former Asphalt Mines of Travers. In German-speaking Switzerland, we recommend the Hölloch caves in the beautiful Muotatal region. The most impressive gorges in Switzerland are the Viamala, Rosenlaui and Aare Gorge and to finish at the border with Germany, visit the very famous Rhine Falls. Photo: © swiss-image.ch/Andreas Gerth 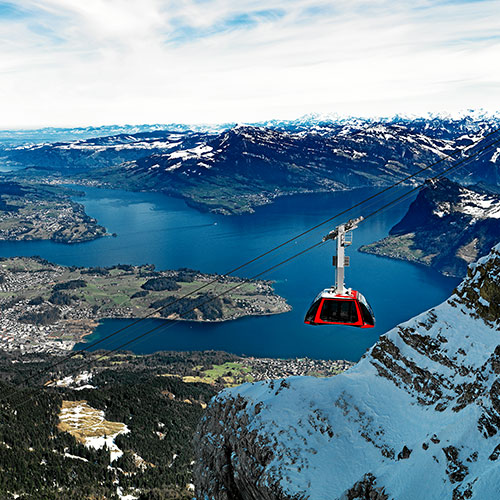 Aside from watches, cheese and chocolate, there is hardly anything that people more clearly connect with Switzerland than its unique mountain scenery. Whether you come here in winter or summer, to ski or to hike – Switzerland is a paradise for both experienced and aspiring peak baggers. Visit the Website of Myswitzerland. Accessible by cable car or on foot for hikers, we recommend : The Pilatus (2118 m), the mountain that dominates Lucerne - The Tiltis (3062 m) at the foot of Engelberg has a revolving cable car and a suspension bridge at the summit - The Niesen (2362 m) is ideal for hikers with a 2h15 ascent (or 1h15 descent) from the middle station to the summit - The Schilthorn (2970 m) and its revolving restaurant. Photo: © swiss-image.ch/Urs Wyss

Travel in Switzerland and guided city tours with Illico Travel 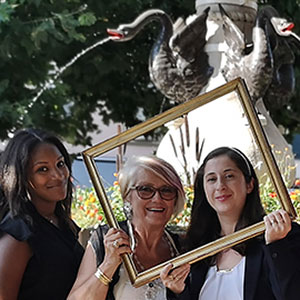 Thematic guided tours or a personalised trip to Switzerland

The best way to understand and appreciate Switzerland's most important cities and regions is to hire a local guide for a guided tour over 3 hours or several days.

Illico Travel is the specialist for guided tours in Geneva and Switzerland. Moreover, the agency managed by Gianna Loredan will be able to organise your trip according to your needs and unusual, from a simple guided tour to a complete programme (hotels, transport, culture). Please contact Gianna and her team and specify your wishes.