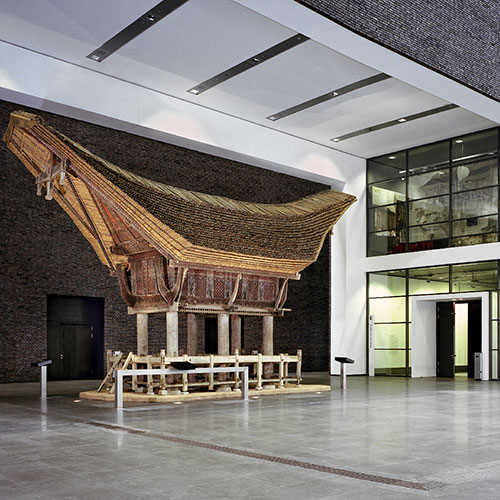 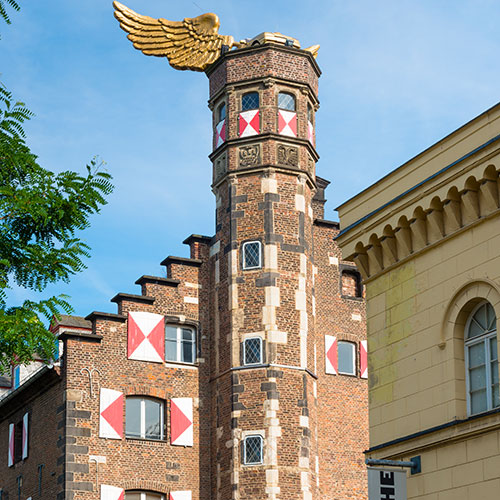 The museums of Cologne

LatLon-Europe presents all the museums of Cologne. Let yourself be amazed by the quality of its very varied and fascinating museums. Even if we try to keep all information up to date, changes are always possible.

Our partner in Cologne for guided tours in English, guides you to the Documentation Centre on National Socialism, the Monument to the Ubians, the Cathedral and the Romanesque Basilicas. More information on the "guided tours" page and by e-mail.
‹ Photo: © Martin Classen Arno Jansen › © Badurina / Köln Tourismus GmbH 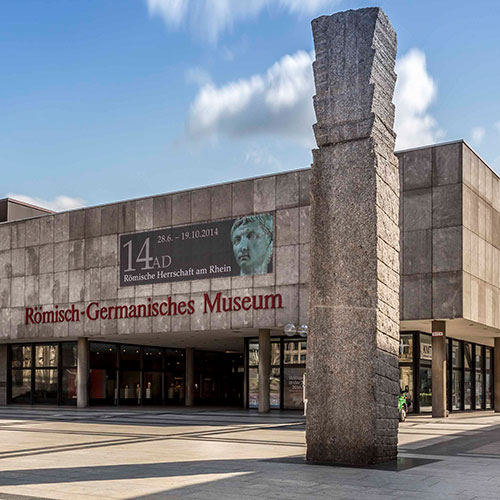 The Roman mosaic with scenes from the world of Dionysos (around 220/230 A.D.) and the reconstructed tomb of the legionary Poblicius (around 40 A.D.) are probably the best known exhibits of the Römisch-Germanisches Museum in Cologne. The museum's collection has profited from the archaeological legacy of Cologne and the surrounding region which spans a period from prehistoric times to the early Middle Ages. The worldwide largest collection of Roman glass vessels and a unique collection of Roman and early mediaeval jewellery are the highlights of this museum.

The Romano-Germanic Museum is currently closed due to general renovation work. Important exhibits will be shown from 15 November in an interim exhibition in the Belgian House (Cäcilienstraße 46). open daily except Tuesdays from 10 a.m. to 6 p.m. Thursday of every month 10 a.m. to 10 p.m. Photo: © Jens Korte / Köln Tourismus GmbH

Opening hours : Currently closed / Part of the exhibition is in the Belgian house
Ticket prices : We inform you as soon as the museum opens
Address : Cäcilienstraße 46, 50667 Köln - www.roemisch-germanisches-museum.de
See also : Archaeological area: www.museenkoeln.de - Jewish Museum with the Mikwe : www.miqua.blog 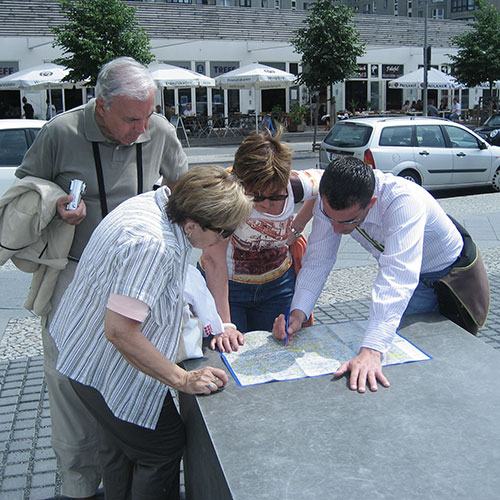 Guided tour: Cologne from A to Z in 90 minutes
Tour-Agentur offers you many guided tours, including the "Cologne from A to Z" tour in English, which will allow you to discover the long and fascinating history of Cologne, from its Roman origins to the present day, including its medieval past. Send your e-mail specifying the date and number of participants to service@tour-agentur.de
Information & booking 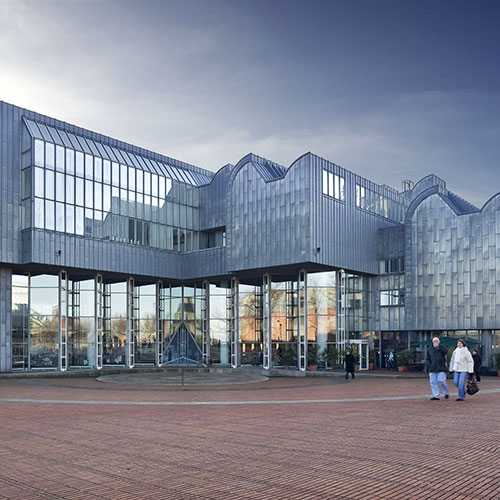 The collection of the Museum Ludwig comprises the most important stages and positions in the development of 20th century art and contemporary art. Roy Lichtenstein, Andy Warhol and George Segal, all icons of American Pop Art, had just been completed when in 1969 they were included as loans in the collection of the Wallraf-Richartz-Museum. The works came from Peter and Irene Ludwig who have built up the biggest collection of Pop Art outside the USA. In 1976 the Museum Ludwig was founded with a gift of 350 works of modern art by the Ludwigs.

Apart from pop art the Ludwigs also donated a large collection of Russian Avantgarde from the period 1906 to 1930 and a voluminous collection of several hundred works by Pablo Picasso as a permanent loan. The works by Picasso have meanwhile become the property of the Museum Ludwig thanks to two generous gifts in 1994 and 2001. Photo: © Thomas Riehle / Köln Tourismus GmbH 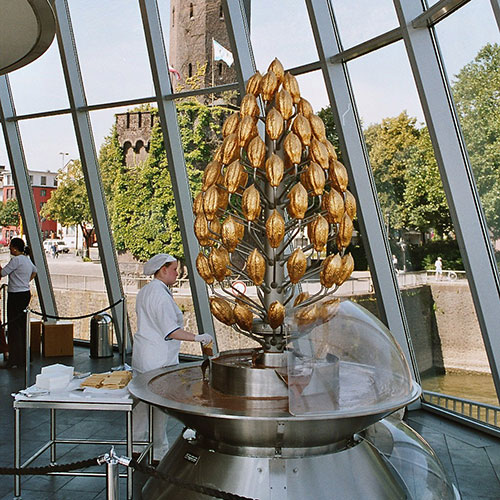 The Cologne Chocolate Museum was founded in 1993 and financed by Dr. Hans Imhoff, then chairman of the governing body of Stollwerck, a Cologne company with a long tradition. Today it is an independent, one-of-a-kind museum providing insight into a variety of aspects of the past and present of chocolate and cocoa in an exciting way.

Current developments in the field of "chocolate and cocoa" are also covered, independent of brands, companies and special interests. Collection, preservation and research are also included in the scope of our activities, as is exciting presentation of enticing exhibits. Intended as a gift to Hans Imhoff's home city of Cologne, the Chocolate Museum is self-supporting thanks to its immense popularity among visitors, and can cover its own running costs, which is unique in the world of museums. Photo: © Schokoladenmuseum.de 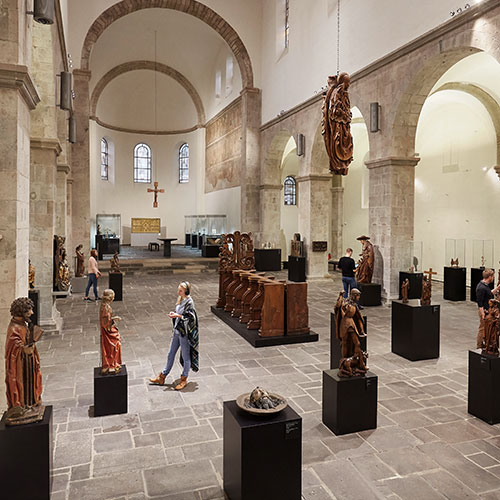 The Museum Schütger of Christian Art in Cologne belongs among the most outstanding places for the study and exhibition of medieval art in Europe and North America. Visitors can discover the art of the middle ages and later periods in the unique ambience of the Romanesque church of St. Cecilia, turned into a museum in 1956, as well as an adjacent building soon to be opened.

Alexander Schnütgen, who laid the base for our outstanding collection of Christian art ranging form the 5th to the 19th century, donated all his artworks to the city of Cologne in 1906. Up to now people tell stories about his zealous and sometimes crafty collection tactics. Photo: © Dieter Jacobi / Köln Tourismus GmbH

The Rautenstrauch-Joest-Museum of Ethnography in Cologne was founded in 1901 and is the only one of its kind in North Rhine-Westphalia. The core of the collection was assembled by Wilhelm Joest, an ethnologist, who had travelled extensively all over the world. His sister Adele Rautenstrauch and her husband generously donated the present museum, specially built for this purpose, to the city of Cologne. The collection now comprises about 65.000 objects and more than 100.000 historical photographs. The museum regards its function as a guardian of cultural legacy, educational institution, and centre for information and discussions. The foremost aim is to create respect for the multitude of non-European cultures. One focus of exhibitions therefor is the comparative approach and presentation of special topics which are relevant for everybody throughout the world. Photo: © Martien Claßen Arno Jansen 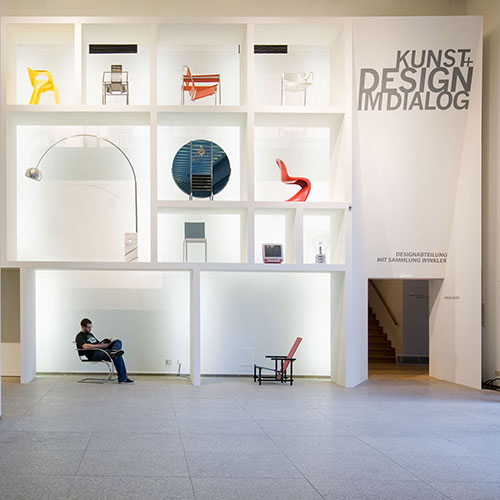 The museum preserves and expands one of the most important German collections of European applied art from the Middle-Ages to the present-day and a high-quality collection of design from 1900 onwards. It offers a tour through rooms designed to illustrate the most various epochs and styles since the Gothic period. Furniture and tapestries, objects used in dining and banqueting, utensils and textiles designed to the highest standard, small sculptures, luxury objects and objects of ornamentation tell the story of interiors furnished with a high regard to quality - nowadays referred to as interior design. more... Photo: © Rheinisches Bildarchiv Maria Lucke 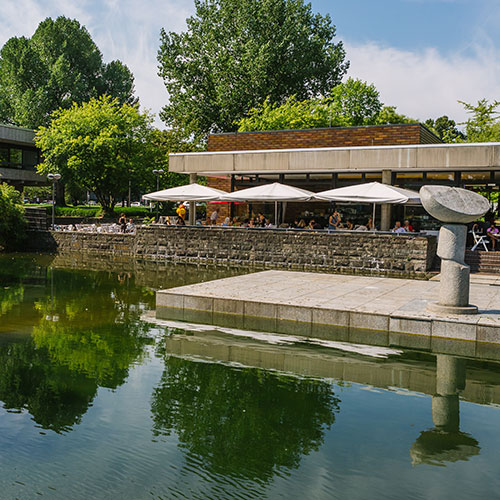 The Museum for East Asian Art was opened in 1913 as the first specialist museum of its kind in Europe. Together with the Museum für Asiatische Kunst (Museum of Asian Art) in Berlin it now houses the most important collection of art from China, Korea and Japan in Germany. With their collection, the museum’s founders hoped to convey a comprehensive picture of every genre and period of East Asian art. But in the late nineteenth and early twentieth centuries, it was anything but easy to imagine how Chinese art, for example, had developed. China was in a semi-colonial state; there were no public museums. More... Photo: © Mike Dyna Köln Tourismus GmbH

The guided tours of Cologne with Tour-Agentur 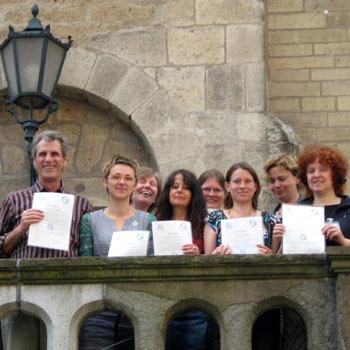 Thematic or tailor-made guided tours with your private guide

A guided tour in English of Cologne is the best way to fully understand and appreciate a city like Cologne with its long and exciting history and many monuments, the formula with a private guide has many advantages; at your pace, visits and personalized advice.

Ilona Priebe and a team of professional and passionate guides offer you personalized and private guided tours of Cologne as well as thematic guided tours. For groups and travel agencies, they offer various services and guided tours adapted to your needs.

Other museums in Cologne

Here is the list of all other museums in Cologne for every interest and age. We wish you a pleasant cultural stay in Cologne
Visit the museum website for rates and special opening hours during public holidays. Despite regular control, changes are always possible.

Museum of the city of Cologne

Museum of Sport and Olympic Games

Art Museum of the Archbishopric of Cologne